„Living in  Cities, does this make us sick?“ Which structures let people get sick at all in different cultures? 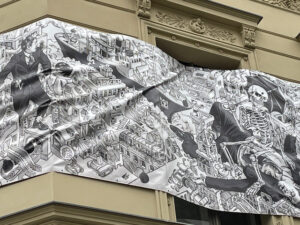 What it means to be “ill” is a cultural question, even if being ill initially seems to mean only the individual suffering of a person. In an epidemiological sense as well as in an economic sense, illness refers rather to social contexts, namely to the problems that the illness of individuals poses for others. But it is also an important question which structures in a culture cause individuals to become ill at all, or at least lead genetic predispositions to break out.

Finally, it is interesting to ask when it is necessary to talk of a “disease” at all. In this respect, there are important differences in various cultures.

In the ctp 5.0. project, club tipping point would like to deal primarily with the question if urban structures couldn’t be harmful to people. Many diseases, somatic as well as psychological, seem to accumulate in urban contexts; living contexts in cities seem to be unhealthy at first sight. So we ask ourselves the question: “Does city life make you sick?”. We try to trace the question in different dimensions.

club tipping point is pursuing a second question in this project, based on last year’s painful experience that theatrical forms of elaboration and presentation can make people sick because of too much closeness and thus risking an infection – and that we therefore had to think about low-touch forms such as “theatre in the digital web”: Does this lead to a sustainable gain and an expansion of theatrical forms of expression? Or are we simply happy to be able to return to what we’ve had, to what we know – to a “business as usual”?

In the ctp 5.0 project, we want to use digital media in particular to explore this question.