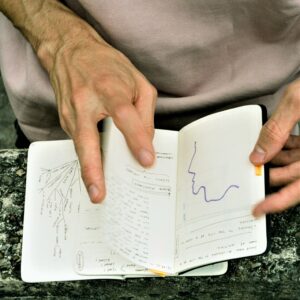 In ctp 5.2 “How We Listen to Disease and the City” we present the web-based project “Listening to the City as a Form of Writing” by sound artist ->Julián Galay, which he developed for ctp together with programmer ->Federico Isasti. It is an interactive page that asks visitors to the site to shoot a video of any city walk with their smartphone and upload the video footage. A little later, it will reappear on the website – and the sounds recorded in the video will be used for a reflection on the “sound of the city” through a text inserted in the video by Julián: ->listeningtothecity

Talk between Julián Galay and Christoph M. Gosepath about the development of ctp 5.2

Christoph: How did you get the impulse for the project „listening to the city“?

Julián: The first version of the work was commissioned by Satellit, a place that works as a satellite of Haus der Statistics with a critical approach to the city and architecture in general. The invitation came from Erik Goengrich and Peter Schmidt, who are developing a cycle of walks, always starting from the same point to the other, in which they invite different guests from multiple disciplines to develop a theme and talk about that.

They proposed to me to do a “soundwalk”, which at this point is almost a genre in itself, these are walks, which generally take place in … ->more